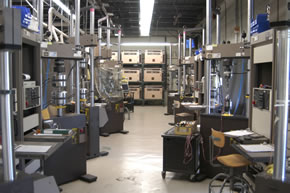 Standard test coupon geometries are M12 through M18, 7/16-UN through 3/4-UN and 0.4-in. through 0.75-in.-diameter buttonhead shank bars. We also provide sheet specimen strain control testing to 0.055-in. minimum thickness and 2000°F depending on material characteristics.

We conduct tests at 0.1- to 2-Hz. frequencies for longitudinal strain control tests, and 0.01- to 90-Hz. for axial load control tests. We also perform creep and stress relaxation tests in servo-hydraulic machines under very precise control from one to several hundred hours.

Elevated temperature tests are conducted with either resistance furnaces or induction field generators, depending on the material characteristics. We conduct cryogenic tests at any temperature between 32°F and -320°F using liquid Nitrogen as a cooling medium. We routinely maintain test temperatures within the sample gage section at 1% of the test temperature.