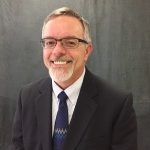 Having started with Metcut in 1975 as a college co-op employee, Bill was hired full time in early 1976 as a laboratory technician. In the years since, Bill has been instrumental in the development of new technologies and techniques for many types of fatigue testing including -320°F through 2200°F testing of round and thin sheet samples for LCF testing, torsional testing capabilities, orthopedic component testing, and Structures testing. Bill was promoted to Test Specialist in 1991, Fatigue Laboratory Manager in 1997, and Corporate Chief Engineer & Manager of the Large Structures Laboratory in 2015.

As part of our team, Bill designed, built, and started production in our French Laboratory in 1993. Beginning in 1997 as Lab Manager, he provided the leadership to expand our laboratory capacity by 35% in ten years, while initiating advanced production scheduling, and advanced tooling and test fixture design through modeling and finite element analysis. Bill was instrumental in starting our Structures Laboratory in 2005 within an 800 SF outbuilding. Bill initiated the first expansion of our Structures Laboratory in 2008 to 2000 SF and again in 2015 to a 10,000 SF building.